St. Paul Catholic School is one of the primary missions of St. Paul Parish. Our School serves students from Pre-K3 through 8th grade, and is committed to the threefold purpose of Catholic Education, Community, and Service. In partnership with parents and the Catholic Church, the administration and faculty help students to acquire knowledge, attitudes, and values necessary for effective Christian service to others.

We will strive to achieve this goal by:

Guiding each student with regard to their individual goals and commitment to share Christ’s life, love, and truth with those near and far.

Striving to develop an attitude of self-discipline by providing the students with the knowledge and skills needed to make the informed choices that life demands in order to become effective witnesses to the Catholic message.

Instilling within the student a desire to reach their potential by aiding them in the development of all natural faculties and spiritual, physical, intellectual, moral, and social powers.

Maintaining an atmosphere wherein students can learn by precept, example, and practice. The faculty and staff of St. Paul Catholic strive to provide an environment in which students feel secure, confident and motivated as they challenge each other to grow toward higher levels of competence, responsibility and maturity.

Providing a religiously oriented program in which the student learns the meaning and value of all God’s creation. This is done by providing daily study of the truths revealed to us by God through religious instruction, appropriate to the age, ability and development of the student, thus providing the student with an appreciation of his/her Catholic heritage.

The faculty and staff of St. Paul Catholic School believe that a Catholic education aids the parents in every aspect of the development and training of their children. St. Paul Catholic School has, as its specific duty, the complete formation of its students through spiritual, intellectual, social, aesthetic, emotional, and physical endeavors. This integration of faith and life is a part of a life-long process of conversion, until the student becomes what God wishes him/her to be.

In addition to many high quality academic and extra-curricular resources, St. Paul Catholic School has a Catholic character in everything that happens at the school. The beliefs and practices of the Catholic Church are a critical part of our school.

The history of education in the Catholic Church has many names to proclaim as gems in her crown: St. Augustine of Hippo, St. Thomas Aquinas, Louis Pasteur, Gregor Mendel, Blaise Pascal, René Descartes, Nicolaus Copernicus, and many other great scholars who were members of the Catholic Church. In its two-thousand year history, Catholic intellectual and educational traditions have significantly developed all dimensions of human knowledge including ethics, language, history, psychology, sociology, mathematics, and logic. Additionally, Catholic education has given rise to such priceless societal gems as the university as well as modern natural science. St. Paul Catholic School strives to sink its roots into this fertile soil of the history of the Catholic Church. The overall approach of St. Paul Catholic School is informed by the distinguished and time-tested traditions of Catholic education.

This is the historical pedigree of St. Paul Catholic School, and we endeavor to live up to these historical achievements of Catholic education. The Catholic identity of the school has been evident throughout its history by intimate and direct contact with the parish, frequently having joint community events with the parish or diocesan communities. A long history of religious sisters serving as principals has given St. Paul School a distinctly Catholic legacy: Sr. Regina, Sr. Maria, Sr. Coralee, Sr. Dolorita, Sr. Elizabeth, and Sr. Patricia.

Like the daily habits of the Catholic saints, prayer is an integral part of our school day. The Catholic character of the school is evident through the faith-centered and family-like approach of how the school day unfolds. Prayer permeates the entire school day, with morning prayers, grace before meals, Confiteor at the end of the day, and Weekly Mass. Prayer always takes an intentional and explicitly central role, as it always has in places where the best and the brightest minds of Catholicism have grown and thrive.

St. Paul, the indefatigable Apostle of the Gentiles 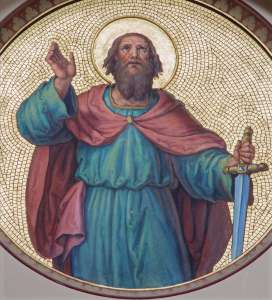 St. Jerome relates, on what ground is not known, that his parents were natives of Gischala, a small town of Galilee and that they brought him to Tarsus when Gischala was captured by the Romans (“De vir. ill.”, v; “In epist. ad Phil.”, 23). This last detail is certainly an anachronism, but the Galilean origin of the family is not at all improbable.

As he belonged to the tribe of Benjamin he was given at the time of his circumcision the name of Saul, which must have been common in that tribe in memory of the first king of the Jews (Philippians 3:5). As a Roman citizen he also bore the Latin name of Paul. It was quite usual for the Jews of that time to have two names, one Hebrew, the other Latin or Greek, between which there was often a certain assonance and which were joined together exactly in the manner made use of by St. Luke (Acts 13:9: Saulos ho kai Paulos). See on this point Deissmann, “Bible Studies” (Edinburgh, 1903, 313-17.) It was natural that in inaugurating his apostolate among the Gentiles Paul should have adopted his Roman name, especially as the name Saul had a ludicrous meaning in Greek.

As every respectable Jew had to teach his son a trade, young Saul learned how to make tents (Acts 18:3) or rather to make the mohair of which tents were made (cf. Lewin, “Life of St. Paul”, I, London, 1874, 8-9). He was still very young when sent to Jerusalem to receive his education at the school of Gamaliel (Acts 22:3). Possibly some of his family resided in the holy city; later there is mention of the presence of one of his sisters whose son saved his life (Acts 23:16).

From that time it is absolutely impossible to follow him until he takes an active part in the martyrdom of St. Stephen (Acts 7:58-60; 22:20). He was then qualified as a young man (neanias), but this was very elastic appellation and might be applied to a man between twenty and forty.

St. Paul was converted from Judaism on the road to Damascus. He remained some days in Damascus after his Baptism, and then went to Arabia, possibly for a year or two to prepare himself for his future missionary activity. Having returned to Damascus, he stayed there for a time, preaching in the synagogues that Jesus is the Christ, the Son of God. For this he incurred the hatred of the Jews and had to flee from the city. He then went to Jerusalem to see Peter and pay his homage to the head of the Church.

Later he went back to his native Tarsus, where he began to evangelize his own province until called by Barnabus to Antioch. After one year, on the occasion of a famine, both Barnabus and Paul were sent with alms to the poor Christian community at Jerusalem. Having fulfilled their mission they returned to Antioch.

Soon after this, Paul and Barnabus made the first missionary journey, visiting the island of Cypress, then Pamphylia, Pisidia, and Lycaonia, all in Asia Minor, and establishing churches at Pisidian Antioch, Iconium, Lystra, and Derbe.

After the Apostolic Council of Jerusalem, Paul, accompanied by Silas and later also by Timothy and Luke, made his second missionary journey, first revisiting the churches previously established by him in Asia Minor, and then passing through Galatia. At Troas a vision of a Macedonian was had by Paul, which impressed him as a call from God to evangelize in Macedonia. He accordingly sailed for Europe, and preached the Gospel in Philippi. Thessalonica, Beroea, Athens, and Corinth. Then he returned to Antioch by way of Ephesus and Jerusalem.

On his third missionary journey, Paul visited nearly the same regions as on the second trip, but made Ephesus where he remained nearly three years, the center of his missionary activity. He laid plans also for another missionary journey, intending to leave Jerusalem for Rome and Spain. Persecutions by the Jews hindered him from accomplishing his purpose. After two years of imprisonment at Caesarea he finally reached Rome, where he was kept another two years in chains.

The Acts of the Apostles gives us no further information on the life of the Apostle. We gather, however, from the Pastoral Epistles and from tradition that at the end of the two years St. Paul was released from his Roman imprisonment, and then traveled to Spain, later to the East again, and then back to Rome, where he was imprisoned a second time and in the year 67, was beheaded.

St. Paul’s untiring interest in and paternal affection for the churches established by him have given us fourteen canonical Epistles. It is, however, quite certain that he wrote other letters which are no longer extant. In his Epistles, St. Paul shows himself to be a profound religious thinker and he has had an enduring formative influence in the development of Christianity. The centuries only make more apparent his greatness of mind and spirit.

St. Paul, Apostle to the Nations, pray for us!

St. Paul Catholic School has developed a unique house program for the middle school students known as the School Knights of St. Paul. Now in its third year, the four houses are continuing to evolve into student designed entities that help the students develop team building skills, recognize students for daily successes and build school spirit.